The target of offering a first COVID vaccine dose to the nine most vulnerable groups by 15 April has been reached, the government has said.

Ministers had vowed to offer a COVID-19 jab to all over-50s, the clinically vulnerable and health and social care workers – about 32 million people – by Thursday.

The target – for the whole of the UK – was reached three days early and means adults under 50 will start to be invited for their first jab “in the coming days”, Number 10 said.

Nearly 40 million vaccine doses have now been given across the UK.

The Joint Committee on Vaccination and Immunisation (JCVI) is expected to publish advice on when those aged under 50 should be invited for their first doses as part of the next phase of the rollout.

People in their late 40s in England will be the first to be invited to book their jabs, it is understood.

The devolved governments in Wales, Northern Ireland and Scotland will decide with the NHS how to implement the JCVI’s advice. 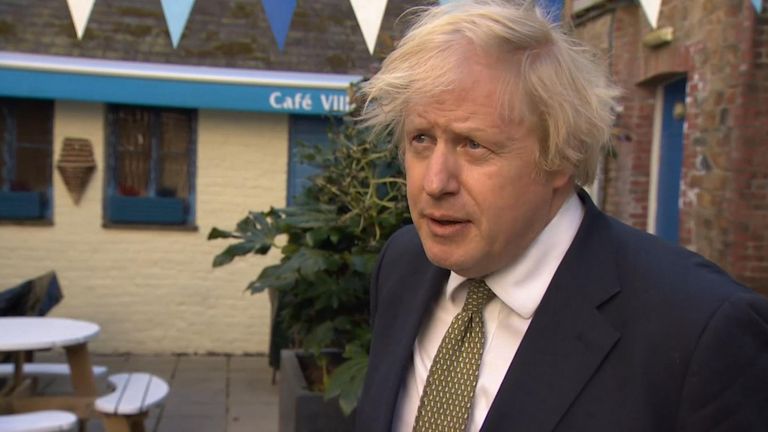 ‘These vaccines are safe and save lives’ – PM

Prime Minister Boris Johnson said: “We have now passed another hugely significant milestone in our vaccine programme by offering jabs to everyone in the nine highest risk groups.

“That means more than 32 million people have been given the precious protection vaccines provide against COVID-19.

“I want to thank everyone involved in the vaccine rollout which has already saved many thousands of lives.

“We will now move forward with completing essential second doses and making progress towards our target of offering all adults a vaccine by the end of July.”

The government reached its primary vaccine target – to offer a first dose to priority groups one to five – in mid-February.

Mr Johnson has since promised all adults will be offered a vaccine by the end of July.

Ministers have offered assurances that this timescale will not be delayed by last week’s recommendation for under-30s to be offered an alternative to the Oxford-AstraZeneca jab due to concerns over blood clotting.

The Medicines and Healthcare products Regulatory Agency (MHRA) said those aged 18-29 in the UK will be offered an alternative vaccine instead, where available, when invited to get a jab.

Last week, the Moderna vaccine became the third jab – along with the Oxford-AstraZeneca and Pfizer vaccines – to begin being used in the UK.

What are the nine priority vaccine groups?

Royals’ blighted US trip to end with Biden meeting and Eilish at prizegiving
‘May the Force be with you’: PM ‘sad’ as Javid to step down at next general election
Lockdown protests intensify in China as UK journalist ‘beaten and kicked by police’ covering unrest
Billie Eilish to headline Prince William’s Earthshot Prize awards
Quick Charge Podcast: November 26, 2022