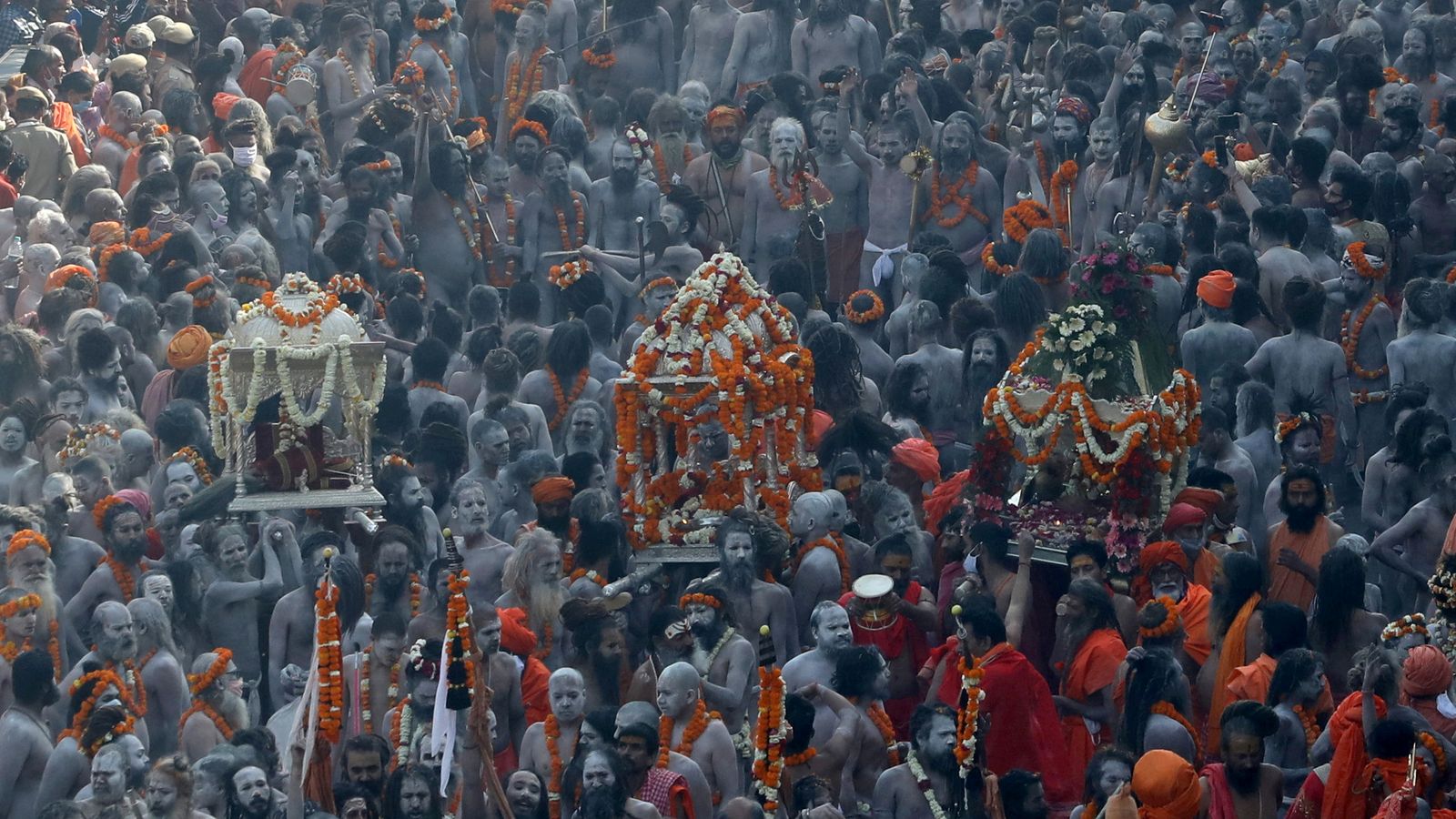 New coronavirus infections in India have reached a record high with 184,372 cases reported in the past 24 hours alone.

The country has reported 13.5 million COVID-19 cases since the pandemic began – pushing its toll past Brazil’s and making it second only to the US, though both countries have much smaller populations.

Deaths are also rising and have crossed the 170,000 mark. Even those figures, experts say, are likely to be an undercount.

Live COVID updates from across the UK and around the world

The latest surge comes as millions of Hindu pilgrims gathered in the temple town of Haridwar, in Uttarakhand, to celebrate Maha Kumbh Mela.

The month-long festival had been been flagged as a superspreader event – as more than 50 million people were expected to attend.

Sanjay Gunjyal, the inspector general of police at the festival, said around 650,000 people had bathed in the river Ganges on Wednesday morning.

After reporting less than 10,000 cases per day earlier this year, India has been the world’s worst-hit country since April.

Mumbai and other parts of Maharashtra, the Indian state worst hit by the pandemic, will now be under stricter restrictions for 15 days in an effort to stem the surge of coronavirus infections.

Last year, a sudden, harsh, nationwide lockdown left millions jobless overnight, and stranded in cities with no income or food. 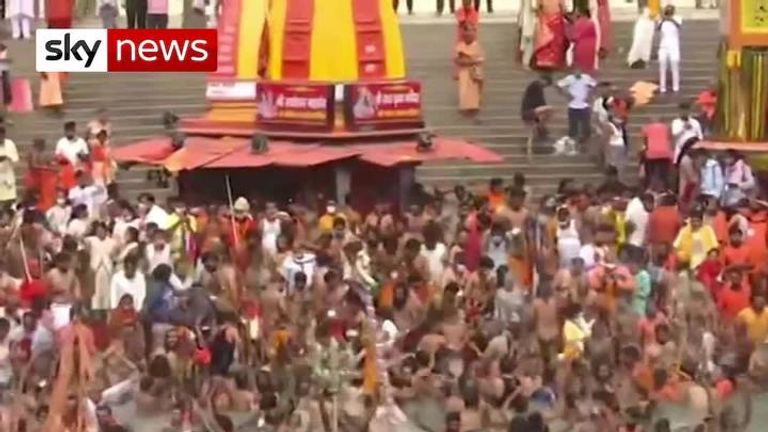 ‘Coronavirus won’t stop me’ – pilgrims push on with the 2021 Kumbh Mela festival.

Since then, state leaders have repeatedly stressed another lockdown would not be imposed.

Compounding concerns about rising cases is the fact that the country’s vaccination drive could also be headed for trouble.

Several Indian states have reported a shortage of doses even as the federal government has insisted there is enough in stock.

India’s western Maharashtra state, home to Pune and financial capital Mumbai, has recorded nearly half of the country’s new infections in the past week.

Some vaccination centres in the state turned away people due to shortages.

At least half a dozen Indian states are reporting similarly low stocks, but Health Minister Harsh Vardhan has called these concerns “deplorable attempts by some state governments to distract attention from their failures”.

Worries about vaccine supplies have led to criticism of Prime Minister Narendra Modi‘s government, which has exported 64.5 million doses to other nations.

Rahul Gandhi, the face of the main opposition Congress party, asked Mr Modi in a letter whether the government’s export strategy was “an effort to garner publicity at the cost of our own citizens”.

India’s spike, which can be seen across the country, might also affect vaccine distribution to some of the world’s poorest countries because it is a major producer and a critical supplier to the UN-backed Covax initiative.

Already the rise in cases has forced India to focus on satisfying its domestic demand – and delay deliveries to Covax and elsewhere, including the UK and Canada.

India’s decision “means there is very little, if anything, left for Covax and everybody else”, said Brook Baker, a vaccines expert at Northeastern University.

Dozens of cities and towns across India have imposed partial restrictions and night-time curfews to try to curb infections, but Mr Modi has ruled out the possibility of another nationwide lockdown.

He also rejected calls from states to offer vaccinations to younger people.

Heathrow asks airlines to cancel 10% of flights today as baggage piles up
Texas school where 19 pupils and two teachers were shot dead is to be demolished
Counting under way as PM faces nervy night with Labour and Lib Dems aiming for by-election victories
Where do G7 countries like the US, Japan, and Germany stand in their shift to clean energy?
NASA’s Curiosity Rover Catches Glimpses of Ancient Ponds and Deserts on Mars