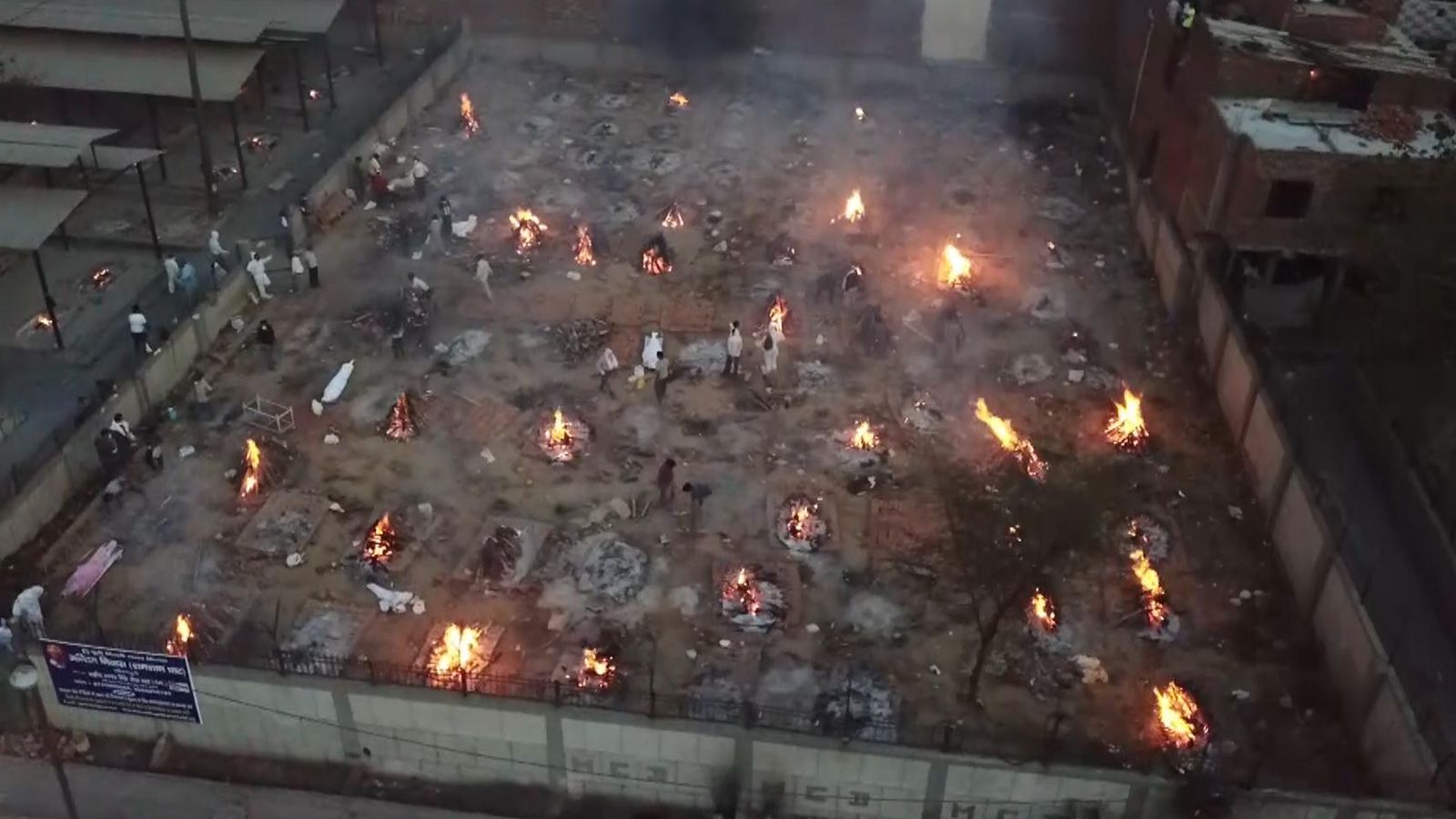 The heat is intense. The grief is palpable.

Fires just do not stop burning in the Indian capital, Delhi, right now.

The coronavirus dead are piled up in vehicles and ambulances and rickshaws – as India continues to set daily global records for new infections.

In one, there are three bodies wrapped in white cloth, string tightly wound round their necks, waist, knees and ankles.

Workers in the crematorium temple seem overwhelmed with the number of dead arriving and there’s much frenzied activity.

The deceased are thoroughly sprayed with disinfectant while still outside, by a cremation team wearing hazmat suits, goggles and gloves.

They’re then carried or lifted on stretchers from the street and into the next staging area. There are rows of deceased with exhausted funeral workers, volunteers and relatives hovering close by or sitting on benches which are hugging the walls.

Every few minutes while we’re here, a body is stretchered through into the makeshift crematorium which has been created on open land next door.

That, too, is now full with burning pyres which form such an important part of the ancient Hindu funeral ritual. Young boys almost run in, pulling piles of wood behind them on cycle carts and tip their loads onto fresh patches of soil for yet more to be built.

They’re furiously building pyres to keep up, but the rapid pace means these sudden and shocking funerals are also hasty, often lonely affairs.

And yet they are crowded too – by rows of parallel pyres with individuals or couples all forced by events into swiftly saying their goodbyes to loved ones.

Few relatives are allowed in because of the coronavirus rules and partial lockdown in the capital. But there are so many funerals going on at once here that it is far from private event – and there is talk of expanding further into the street if the level of deaths remains as high.

This is India – now the centre of the global pandemic – and in its capital city, each new COVID-19 death arrives less than four minutes after the last.

Some of the top hospitals – and some of the smaller ones too – are saying they’re battling to save lives in the midst of an acute oxygen shortage.

Over the last few days, several have been putting out alarming pleas for help on social media, while others have said they can no longer accept patients.

One announced on Twitter that patients would have to be discharged and sent home if they didn’t get any more supplies of oxygen.

The Yamuna Sports Complex in the city – which was converted into a COVID facility complete with almost 900 beds to help with the shortage of hospital vacancies was closed only days later.

A notice on the gate read: “Oxygen Beds are not available.”

We found a rickshaw driver and his two daughters sitting outside in his tut tut. They’d spent around three months’ salary buying their own oxygen cylinder which they’d purchased that morning and he was hooked up to it.

He was determinedly sucking on the air. “They’ve told us we cannot be admitted,” his daughter Heena told us. “But this oxygen is already running out and we only got it a few hours ago.”

Everywhere, rich or poor Indians are taking matters into their own hands to try to stay alive.

There were queues outside a small business which normally sells bottled gas to welders and contractors. Now, their customers are those who have COVID in the family or community.

The owner told us he suspects some are hoarding, but he asks no questions and no explanations are forthcoming. The crowd all had their own oxygen cylinders and all those we spoke to had sick relatives or neighbours they were buying for.

The cylinders are now like gold dust and they’re selling on the black market at a price which is on average fourfold their normal level. “It’s heart-breaking but we Indians are fighting,” one man told us.

“This is all on the government. If this had happened a year ago then it is understandable. No one knew back then. But they do now and they’ve had a year to prepare and they wasted it. So now we have no choice.”

And India may not yet have reached its peak. That’s forecast to come somewhere in mid-May.

These grim figures could keep on going up. As one commentator put it: it’s not just a sharpish uptick. The country’s coronavirus cases are shooting up like a straight wall.