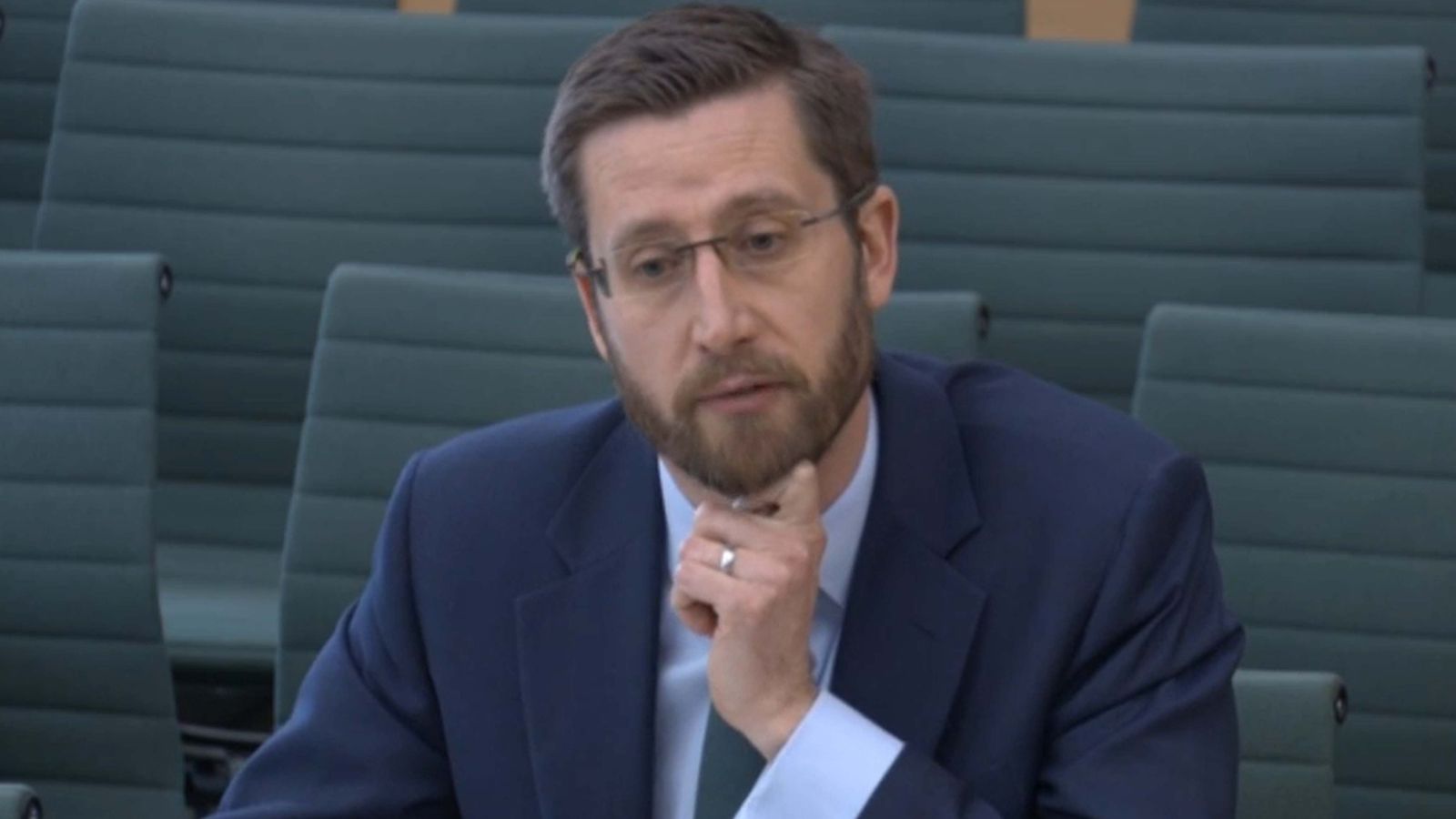 The UK’s top civil servant has denied a “chatty rat” inquiry into government leaking has been de-prioritised – despite the probe lasting more than five months – but admitted the culprit may never be found.

Cabinet Secretary Simon Case left MPs frustrated about the progress of the investigation, which has been ongoing since the end of October last year when details of England’s second COVID lockdown emerged in the media before a formal announcement.

Mr Case also failed to give answers on a number of other matters – including the funding of the prime minister‘s refurbishment of his Downing Street flat.

In a 1,000-word blogpost, Mr Cummings alleged the prime minister suggested halting the “chatty rat” inquiry as it might have implicated a friend of his fiancee, Carrie Symonds.

But Mr Case on Monday added to Downing Street’s denial that Mr Johnson had sought to interfere in the inquiry, telling MPs: “In relation to this particular leak, and others – the prime minister has always been clear, very determined to see these inquiries complete.”

And he confirmed that the inquiry is ongoing in a “clear indication that the source or sources haven’t been identified”.

However, suggesting the source of the leak might never be found, Mr Case told the committee: “In the time that has now passed, I think it is probable that the team will not successfully identify the source or sources but work is ongoing.”

He assured MPs the inquiry “at no point” over the last five months had been “in any way deprioritised”.

“It is in the hands of professional investigators who have a range of tools and techniques at their disposal,” he added.

“You’ll understand if I don’t go into those in detail… because that would prejudice future inquires. But I can assure this hasn’t been deprioritised in any way.”

Mr Case failed to back up Mr Cummings’s claims that he had been cleared as a suspect in the inquiry.

Asked if he accepted what Mr Cummings had said in his blogpost, Mr Case told MPs: “I am constrained in what I can say because it’s in the context of an ongoing investigation.”

Later in his appearance before the committee, Mr Case confirmed he is looking into whether a trust could be established to help fund upgrades of the prime minister’s residence in Downing Street.

He said work had been ongoing on the issue “for more than 12 months” as he highlighted how other official government residences – such as Chequers and Dorneywood, as well as the White House in the US – are supported by trusts.

He confirmed Lord Brownlow, a Conservative Party donor, had “agreed to be a chair of a putative trust” with “work done to identify cross-party potential trustees”.

Last week, in leaked emails seen by the Daily Mail, it emerged Lord Brownlow claimed to have paid £58,000 to the Conservative Party to “cover payments the party has already made on behalf of the soon to be formed ‘Downing Street Trust'”.

And Mr Cummings alleged the prime minister had devised a plan to have donors “secretly pay for the renovation” in what Mr Johnson’s former chief aide branded an “unethical, foolish, possibly illegal” move.

It led to further questions about how Mr Johnson was funding his overhaul of the flat above 11 Downing Street.

He and his fiancee, Carrie Symonds, are said to have employed eco interior designer Lulu Lytle to oversee an overhaul of the flat in order to replace what has been termed Theresa May’s “John Lewis furniture nightmare”.

The prime minister is now said to have stumped up the cost of “wider refurbishment” beyond basic works himself.

But, earlier on Monday, Mr Johnson did not deny discussing using donors to fund the refurbishment.

Bitcoin surges 7% to top $20,000, its highest level in more than a week, even as stocks hit 2022 lows
Briton captured in Ukraine used as ‘punching bag’ over days of torture
Quick Charge Podcast: September 24, 2022
Apple begins making the iPhone 14 in India, marking a big shift in its manufacturing strategy
‘Winning battle of ideas’: Shadow chancellor ‘most optimistic’ about Labour’s future in 12.5 years as MP