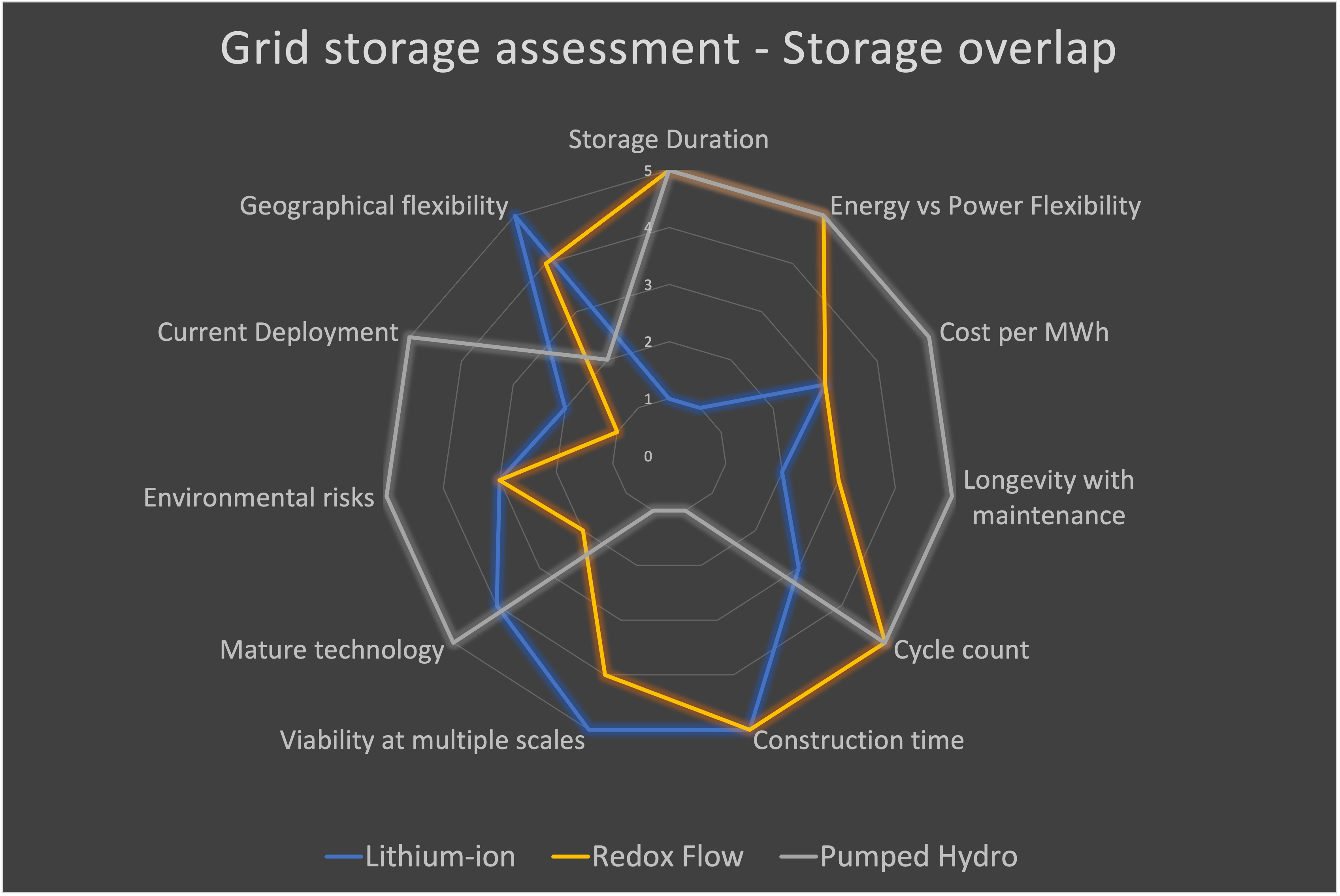 There are multiple races under way in grid storage. The big one right now is securing seed funding for potential battery technologies. Billions are being invested in often faint hopes. Within technology groupings such as redox flow, a variety of chemistries are in competition to see which ones are most viable.

But in the coming decades, the race will be purely one of deployment. This article is a projection with large error bars of my expectation of how this race will play out through 2060.

If you haven’t read the first part of this series, it lays out the attributes used to coarsely and qualitatively assess major grid storage contenders. The need for storage is rich and complex, and no single technology will dominate. As a result, three primary technology groups were selected for different aspects of the storage requirement: closed-loop pumped hydro storage, lithium-ion batteries, and the dark horse, redox flow batteries.

That last probably raised the most challenges from commenters in CleanTechnica’s usually good comments section, and on LinkedIn where global storage and grid transformation experts weighed in. As always, picking winners means picking losers too, and advocates of hydrogen, compressed air, liquid air, molten salt, and other technologies considered to be in the also-ran category took issue and sometimes offense.

But the next obvious question is how much of which storage is likely to be deployed, and hence, where will all the money for storage go? This is going to be a big business over the coming 40 years or so until we have achieved 99% grid decarbonization.

How Big Is It Going To Be?

That’s a million dollar question. Actually that’s a multi-billion dollar question. I chose to answer this by returning to Mark Z. Jacobson and team’s most recent report on achieving 100% renewables by 2050. I knew that Jacobson and co’s modeling cover 143 countries, broken into 24 grid regions, addressed transmission increases necessary to move renewably generated electricity around, and also dealt with storage. While the study has its detractors, I’ve duplicated enough aspects of the math, reviewed the criticisms, and discussed my minor concerns with Jacobson a sufficient number of times that I’m convinced it’s robust. When I spoke with Jacobson about his technology choices, he made it clear that they had made very conservative selections based on what was currently available, what was already being deployed, and using current prices. My projections are rather different, but do come with clear provisos as well.

Table 3 of the study provides the team’s breakdown of required storage. As I’ve consistently asserted, the amount of storage required is much lower than most people expect. And as is clear, my expectations about what will provide that storage are substantively different than the Stanford team. Solar thermal heat, as one example, falls into the also-ran bucket of my assessment, but is a mainstay of the Jacobson et al. projection. This is not to say that we disagree, but that they made a specific set of conservative choices, not a prediction of what will dominate storage. I’m more in the prediction business in this piece, but will also say clearly that this is a projection of a scenario I think to be likely, not a cast-in-stone Tony Seba-esque statement of magical certainty.

As a side note, I’ve found another place where my choices would be different than Jacobson and team, which is that I think concentrating solar power and thermal storage is mostly a dead end. It’s been outcompeted by the direct creation of electricity using photovoltaics, which are much cheaper, simpler to deploy, trivial to calibrate, and cheap to operate. The other place is in rooftop solar, something Jacobson and team rely on for roughly 15% of future electricity generation, but which consider more likely to be in the 5% range. Jacobson and I discussed this on a CleanTech Talk just before COVID-19 changed the world.

The way I read this table is that 3.7 TW of storage will be required on the grid. It’s possible I’m misreading this, and welcome insights and clarifications. Note, this isn’t TWh, but deliverable capacity, the power. The actual storage of energy is a multiplier of that, not counted in Jacobson’s study. This is a significant point. At present, per one source, we have 9,000 GWh (energy) of pumped hydro grid storage today, but only 160 GW of capacity (power). Assuming the ratio holds, that suggests that we will need about 210 TWh of storage globally.

It’s also worth noting that grid storage is an end game for decarbonization of the grid requirement, not a prerequisite. Every GWh of delivered electricity from renewables is already cutting into the capacity factors of coal and natural gas. Natural gas was a peaker and backup generation source of electricity before the fracking revolution; it will return to that role, and eventually be entirely supplanted by storage. But most of the grid storage capacity will be built after 2040. Job one is building as much wind and solar as possible as quickly as possible, as this displaces the most coal and gas the most rapidly.

Grid storage is measured in multiple ways, as people were quick to point out. I chose to use one measure, cost per MWh, in my selection criteria. For this, however, I’ll project based on GW of capacity/power.

As a reminder, lithium-ion power and energy are fairly tightly coupled. That’s what makes it suitable for cars and shifting afternoon sunlight four hours into the future, as well as specific types of grid ancillary services, but it does mean that it’s not going to be a large part of the grid storage world.

And it’s probably worth returning briefly to vehicle-to-grid (V2G) expectations. V2G advocates were another group who objected to the winners I selected. However, I’d projected the various value propositions of vehicle batteries for grid management in an earlier piece. The net is that due to a variety of barriers to the use of V2G, including relatively slow growth of electric vehicles, the long lifetime of non-electric vehicles, lack of current standards, lack of automotive vendor commitment, significant global variability, grid regulatory structures, grid management legacy technology challenges, a requirement for intermediary aggregation, a pronounced challenge with taking electricity and range out of people’s vehicles to make it work, the 90% of Asian people living in multi-unit residential buildings, and finally the power to energy limitations, I consider V2G to be a relatively minor player in supplying backup, but a major player in providing demand management coverage to reduce peak demand. Nonetheless, it will be part of the mix, but simply reduces the requirement somewhat.

How Much Of Which Type Of Generation By When?

As I pointed out in the first piece, pumped hydro storage (PSH) is well out of the gate, while other grid storage technologies have barely arrived at the gate. There are 160 GW of PSH on the grid already, and another 60 GW under construction that I was able to identify, with 50 GW of that in China alone. Lithium-ion battery storage, especially from Tesla, gets the majority of the headlines, but it barely ranks. My third choice, redox flow batteries, is far behind lithium-ion at present, but as stated in my first assessment, I expect it to more than catch up due to the decoupling of power and energy, and to be second only to PSH on the grid. I’ll restate a proviso. This is a projection of 40 years of the future. It’s an expert opinion, not a meta-analysis of all of the studies done by a major university. It is at the bottom of the pyramid of evidence, and should be treated as informative, not predictive. There are big error bars on this. I think it’s more correct than not, but I’m with Kahneman and Tetlock in my opinion of un-nuanced headline hunters who make bold and distant predictions without bothering to be specific or the check accuracy.

Keen-eyed readers will note two things immediately. My projection is to 2060, not 2050, and the total amount of capacity isn’t 3,700 GW. The reason for that is that while I know that Jacobson’s 2050 target is eminently achievable, I think it’s unlikely to be achieved, so my timeframes for complete decarbonization are longer. I think we’ll still be burning some gas and building storage and generation capacity through 2080 or 2090. This is an obvious and arguable timeline and capacity challenge, but I’m comfortable that it’s sufficiently realistic, while uncomfortable as always with the implications for global warming. While RCP8.5 has become increasingly unlikely, we aren’t even close to being out of RCP6.0 with its 2-3.7 degrees of warming and median 60 cm of sea level rise by 2100. My projections are based in that pragmatic, if unfortunate, zone of reality.

I think pumped hydro storage will almost double by 2030 with all of the projects in construction and development today. I think lithium-ion will still have the edge on redox flow through 2030 due to the relative maturities of the technologies, but that redox flow deployments will still be in the 3 GW capacity range by then. After that redox flow will catch up and significantly surpass lithium-ion as the scaled storage requirement increases.

It’s also worth pointing out that the also-ran category is still close to 100 GW of power, and likely 6 TWh of energy storage. This is a non-trivial niche, and while I think the three technologies I’ve chosen will be the winners, there’s an awful lot of money that will be spent usefully in the also-ran category. If you are a big fan of Germany’s hydrogen salt cavern plans or liquid air or compressed air storage, be comforted to know that those edge cases are in a fat edge.

One more thing worth stating. There’s vastly more than enough fresh water for pumped hydro. I hear this as an argument against it regularly, so let’s put it to rest. The suggested roughly 2 TW of capacity is like 120 TWh of capacity. With closed-loop pumped hydro storage, a 500-meter head height requires a gigaliter of water to provide a GWh of storage. That equates to 120,000 gigaliters required for pumped hydro.

A gigaliter sounds like a lot, but it’s 1/1200th of the water consumed in the US every single day. 120,000 gigaliters sounds like a lot, but there’s 10.5 million times more freshwater on Earth. Pumped hydro doesn’t consume the water daily, it just sits there and gets pumped up into the upper reservoir and then runs down into the lower reservoir. There is no concern about the use of pumped hydro. The second concern is about flat lands, which is addressed both by transmission and by redox flow storage, one of the areas where it has an advantage. In other words, like most of the concerns people have about pumped hydro, it’s without merit.

Part 3 of this assessment will break down the redox flow chemistries and implications. There are a lot of technologies in there, and I’ll be doing an assessment across them. And full disclosure: just as I’ve had business conversations with pumped hydro storage developers and lithium-ion battery business people, I’m engaged in a senior role with a redox flow company. I have skin in this game. More on that in part 3.