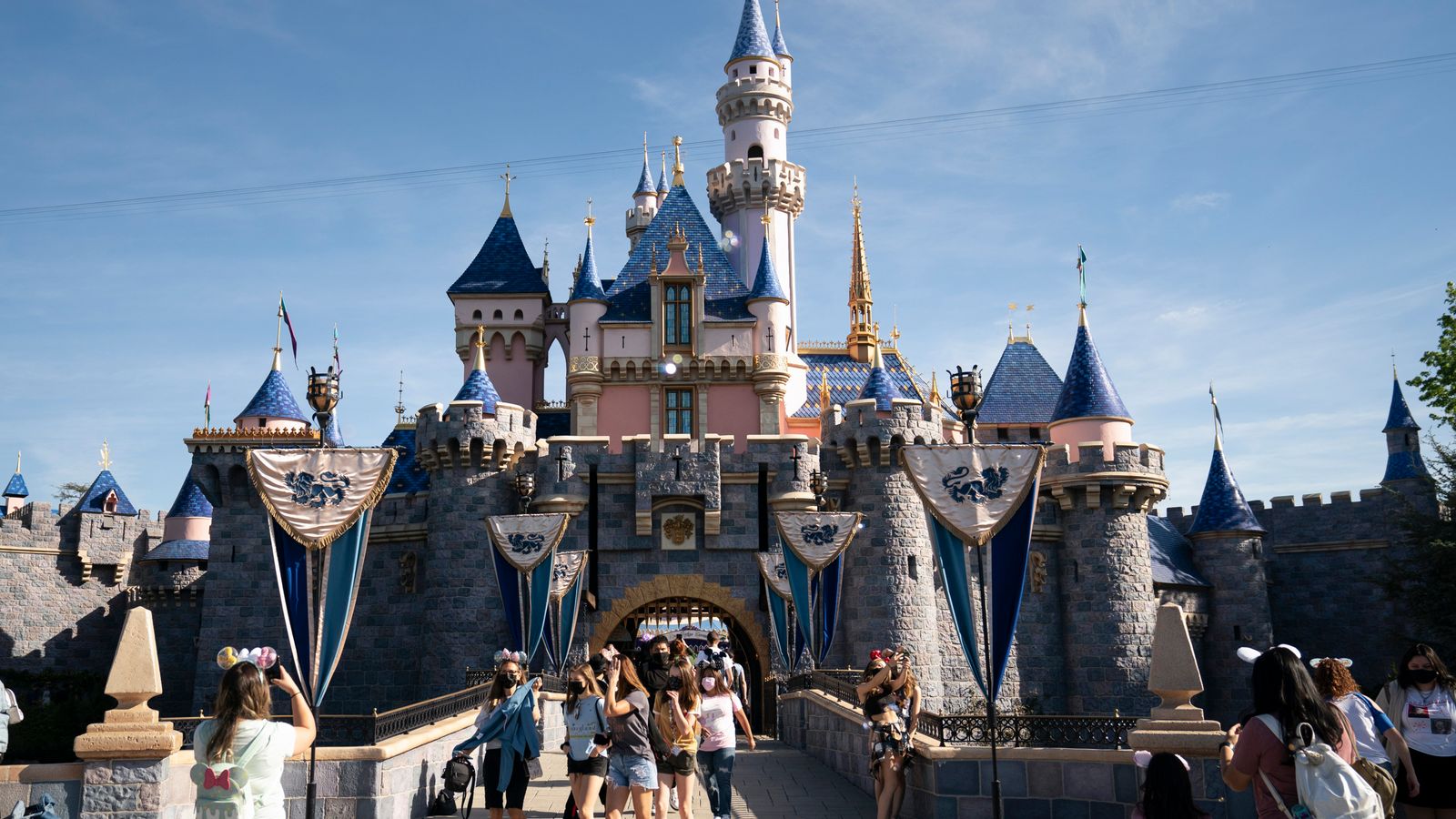 Entertainment giant Disney has seen another drop in revenues, with the pandemic still weighing heavily on its business, as it plans to put yet another film straight onto its streaming platform.

Its world-famous theme parks are still taking a hit as a result of COVID-19-forced restrictions, and cinema closures have kept its films off the big screen – but the Disney chief Bob Chapek has told investors there are reasons for optimism, posting revenues of $15.61 billion (£11 billion) in the three months to 3 April.

The company’s streaming platform Disney+ has seen its subscriber numbers double in the last 12 months to 103.6 million, with titles such as Marvel‘s WandaVision and The Falcon And The Winter Soldier and Star Wars spinoff The Mandalorian driving growth to its platform.

However, the growth is lower than the 109.3 million predicted by analysts, with chief financial operator Christina McCarthy admitting growth had slowed in the first two months of the year due to no major product launches and a price increase in some parts of the world.

The success of Disney+ has driven the firm to add more titles to the platform at the same time as their cinematic release, with upcoming movies like 101 Dalmatians prequel Cruella and Marvel’s Black Widow both getting a simultaneous release in theatres and online.

On Thursday it was revealed that Jungle Cruise, based on the classic Disneyland ride of the same name and starring Dwayne “The Rock” Johnson and Emily Blunt, would be the latest film to get a Premier Access release later this year on Disney+, as well as getting a cinema release.

However, another upcoming Marvel film, Shang-Chi And The Legend Of The Ten Rings, will be made exclusively available to cinemas for 45 days following its September release, as part of a plan to welcome audiences back into movie theatres.

In the last 12 months, Disney has shifted its business model to focus more on its streaming service, taking on the likes of Netflix and Amazon Prime Video.

In the UK, it recently launched an additional library of content called Star, which features films and TV shows aimed at a more adult audience, with ABC and Fox titles such as Family Guy, Borat and Oscar-winning Nomadland.

Its parks remain affected by the pandemic however, posting an operating loss of $406 million (£288 million) with Disneyland in California only able to open its doors in April, more than a year since it first closed its gates, and operating at reduced visitor levels.

Disneyland Paris remains the company’s only park to still be closed, due to the uncertainty surrounding the pandemic on the continent.

Google CEO Pichai tells employees not to ‘equate fun with money’ in heated all-hands meeting
US interest rates hiked again to tackle soaring inflation
Germany nationalizes energy giant Uniper as Russia squeezes gas supplies
‘Winning battle of ideas’: Shadow chancellor ‘most optimistic’ about Labour’s future in 12.5 years as MP
Apple’s new AirPods Pro are worth the $249 even if you already own the older version