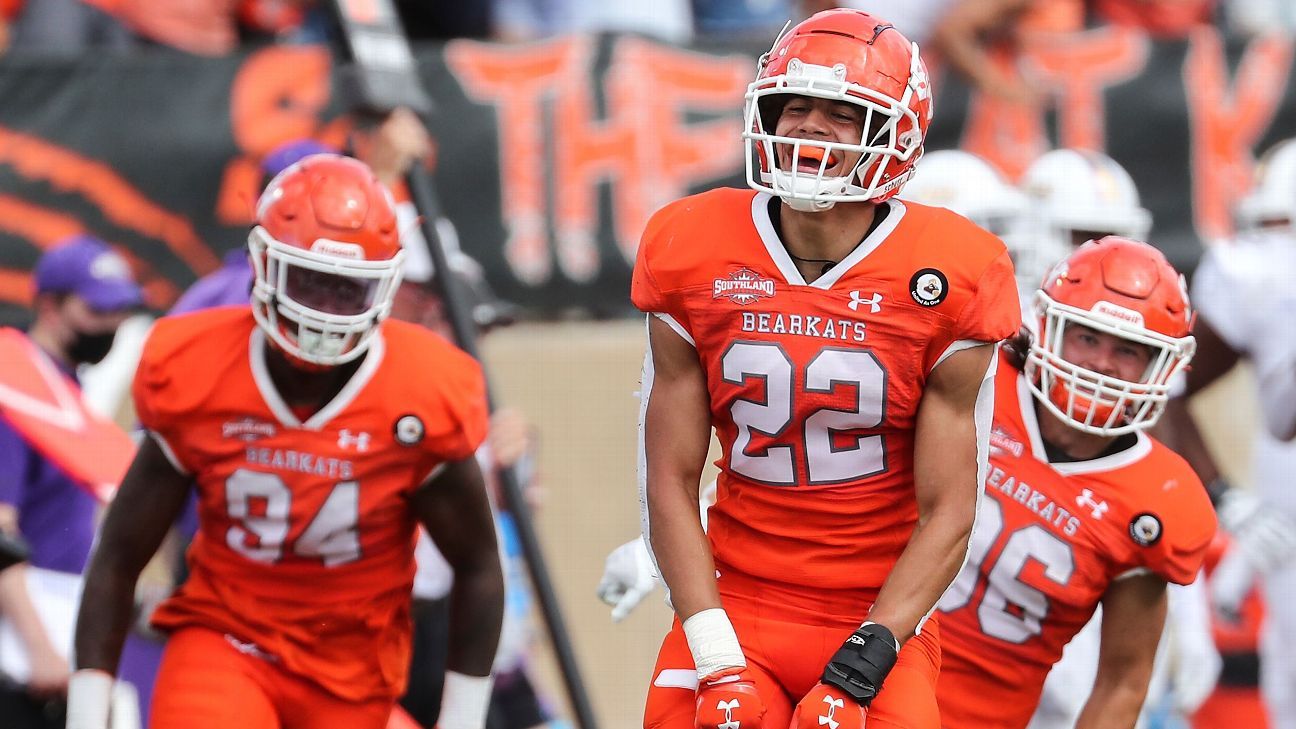 The last game of a bumpy, difficult and fun-as-hell spring FCS season kicks off in Frisco, Texas, on Sunday afternoon. Top-seeded South Dakota State will meet No. 2 seed Sam Houston for the first time (2 p.m. ET on ABC and the ESPN App), and the storylines overflow. Let’s lay out everything you need to know.

A bridesmaid will become a bride

John Stiegelmeier’s SDSU Jackrabbits made the jump from Division II to FCS in 2004 and fit in pretty quickly. They won 6.3 games per year through their first eight seasons and only once, in their debut year, finished under .500 in the always dynamite Missouri Valley Football Conference. They took a major step forward beginning in 2012, winning nine games per year since and reaching nine consecutive FCS playoffs. They made the semifinals in 2017 and 2018, but losses to James Madison and rival North Dakota State by a combined 95-37 ended those two runs and reinforced their status as an excellent, but not quite title-worthy program.

The Jackrabbits earned the top seed in this spring’s 16-team field after going 5-1 in the MVFC, and they have looked the part. They pummeled Holy Cross in the first round, then unleashed a second-half charge to survive a smoking hot Southern Illinois 31-26 in the quarterfinals. Once again in the semis for the third time in four seasons, they cleared the hurdle and then some, blowing out Delaware 33-3.

SDSU’s path to the finals was manageable, both because of the benefits that stem from being the No. 1 seed and because JMU and NDSU were on the other side of the bracket. Sam Houston beat them both.

This spring, however, the Bearkats plowed through six Southland foes by an average of 45-18 to earn the No. 2 seed and home-field advantage for three rounds. They needed every ounce of magic Bowers Stadium could give them, winning those games over Monmouth, NDSU and JMU by a combined 13 points.

Stiegelmeier and Keeler are by most accounts two of the most liked coaches at the FCS level. One of them gets to lead their respective school to a program-changing win on Sunday.

In the only loss of his career, Mark Gronowski started out 5-for-7 for 161 yards and two touchdowns.

SDSU jumped to a 14-7 lead early at eventual quarterfinalist North Dakota in February, but inconsistency doomed the Jackrabbits. They scored just once in their final nine drives, and Gronowski threw two picks — more than he threw in his entire senior season at Neuqua Valley High in Naperville, Illinois — in 28-17 loss.

The story of the early spring was QB struggles from FCS powers, but while teams like NDSU never quite solved their issues, Gronowski adapted and found a different gear. He has since combined quality game management (58% completion rate with minimal risk and only one interception) with explosiveness (14.5 yards per completion) and, perhaps most importantly, participation in the run game. He’s rushed for 100-plus yards four times — including a 142-yard performance in a comeback against SIU — and the Jackrabbits have scored 30-plus points in five games during a seven-game win streak.

Combined with a defense that has allowed more than 17 points just once in that span, the Jackrabbits have rounded into the most efficient team in the subdivision. Gronowski has built a great rapport with the Janke brothers (twins Jaxon and Jadon, who have 48 catches, 850 yards and 11 touchdowns between them), who took on larger-than-expected roles when receiver Cade Johnson opted out to focus on the NFL (He landed with the Seahawks as a free agent.).

Gronowski’s legs, meanwhile, have distracted defenses from those of Pierre Strong Jr. and Isaiah Davis, who have combined for 1,290 yards at 6.5 per carry. Against a dominant Delaware defense last week, SDSU combined the ground success that has defined the Steigelmeier era (Strong and Davis: 23 carries, 143 yards) with chunk plays through the air — a 30-yard touchdown to Jaxon Janke, a 36-yarder to Davis, a 24-yard trick-play touchdown from Davis to Gronowski — to carve up the Blue Hens. They averaged 7.2 yards per play to Delaware’s 3.2.

SDSU will try to dominate SHSU in the trenches

The Jackrabbits wreaked havoc on Delaware’s undersized defensive front, keeping Gronowski clean and giving Strong and Davis large runways. JMU carved out solid running room against SHSU last week, too, and SDSU will certainly attempt to do the same. SHSU’s line is much bigger than Delaware’s — nose tackles Joseph Wallace (6-foot-1, 300 pounds) and Scean Mustin (6-3, 325) among others — but the Bearkats’ 3-3-5 defensive scheme is built on speed. The linebackers are basically big safeties (average size of the linebackers two-deep on the roster: 6-1, 212).

Even with Gronowski’s progress, SDSU isn’t going to ask him to throw 30 times unless it’s absolutely necessary. How the Bearkats handle the Jackrabbits’ running game will define the terms of the outcome. So, too, will the Bearkats’ ability to keep SDSU defenders out of the backfield.

Mark Gronowski notches his third touchdown of the day with a 14-yard strike to Blake Kunz.

The Jackrabbits made 12 tackles for losses against Delaware last week; ends Reece Winkelman and Quinton Hicks had five and nose tackle Caleb Sanders and linebacker Logan Backhaus each added two. Sam Houston does allow nearly six TFLs and two sacks per game, and if that becomes more like eight and three, respectively, the advantage shifts toward SDSU.

At the same time, SHSU is the fastest team the Jackrabbits will have faced this season, maybe the fastest in FCS. Despite early disadvantages, the Bearkats figured out how to generate just enough of a push to turn the JMU game around. The Dukes managed only one rush over 10 yards and one pass over 15 in the second half, and after scoring on four straight second-quarter drives, they scored in just two of seven after halftime. Even if SDSU carves out an early advantage, there’s nothing saying that the advantage will last.

On one hand, the fact that SHSU hasn’t played anywhere near a complete game so far in the playoffs is probably a bad thing, because at some point playing with fire gets you burned.

On the other hand, the “Kardiac Kats” have been asked to prove their resilience repeatedly and have come up bigger and bigger each time.

* Against Monmouth, they desperately struggled to establish offensive consistency, driving more than 50 yards just twice and punting eight times. They watched a 21-0 lead fritter away to 21-15 in the fourth quarter, then allowed a fourth-down conversion as the Hawks drove down the field in the closing minutes. But star end and Buck Buchanan Award finalist Jahari Kay stuffed Monmouth’s Romeo Holden for a huge loss on first-and-goal, and on fourth down, with the game on the line, Isaiah Downes stepped in front of a Tony Muskett pass to seal the win.

* Against NDSU, things got even tighter. SHSU scored the first 17 points of the game, but a blocked punt for a safety and two return scores in two minutes — one on a kickoff, one on a punt — allowed the Bison to tie the score. Reeling and suddenly down 20-17 in the fourth quarter, the Bearkats calmly drove 72 yards in 4:32, with Eric Schmid completing a huge 47-yarder to Ife Adeyi on third-and-10, then scoring the go-ahead points on a six-yard plunge. Like Monmouth, NDSU drove down the field in the closing minutes, but SHSU made a fourth-down stop and moved on.

* The JMU game required sustained resilience. Trailing 24-3 at half, the Bearkats carved up a dominant Dukes defense in the third quarter. They compiled 217 combined yards in 17 plays to score four times, sandwiching in a punt return score from star Jequez Ezzard to complete a 35-3 run. JMU rallied and pulled within 38-35 with 10 minutes left, but once again, SHSU’s speed and swarming ability paid off. In their final drive, the Dukes needed six minutes to drive just 51 yards, and Joseph Wallace’s third-down sack forced JMU into a 51-yard field goal try. It sailed left, and SHSU ran out the clock.

The Bearkats might not be the most consistent team in FCS, but they’ve proven that a combination of explosiveness and resilience can take you awfully far. Ezzard has gained 786 yards and scored eight times in 32 combined rushes and receptions, and he has returned two punts for scores. He’s third in FCS in both yards per reception and yards per punt return. Running back Ramon Jefferson is also a major contributor, gaining 693 yards and scoring seven times in 115 touches. Schmid is completing 60% of his passes, but he’s thrown nine picks. He’s averaging 14.9 yards per completion.

If this game comes down to efficiency, it probably favors the Jackrabbits

If it comes down to who’s making and preventing big plays, however, Keeler’s Bearkats might seize control. Per Caesars Palace, SDSU is a 4.5-point favorite, which, combined with the 47.5-point over/under, projects a score of 26 to 21.5. It would only take a couple of big shots from Schmid, Ezzard and company to redefine that expectation.

The last time two teams with no FCS titles met in the finals was 2011, when NDSU kick-started its long run of dominance with a win over Sam Houston. A decade later, the Bearkats get another chance against another Dakota team looking to start a run of its own. In terms of drama and plot twists, this strange FCS season — and smaller-school football in general — has been a gift that keeps giving. Now, we get to see if there’s one more thriller left for us to take in this spring.

Russia is squeezing Europe’s gas supplies, sparking a bitter and reluctant return to coal
Tesla is tracking to have a working prototype humanoid robot by the end of September
PM admits by-election defeats not ‘brilliant’ – but shrugs off potential Tory plot to replace him
T. Gilliland wins NASCAR Truck race at Knoxville
Biggest rail strike in three decades to go ahead as last-ditch talks fail