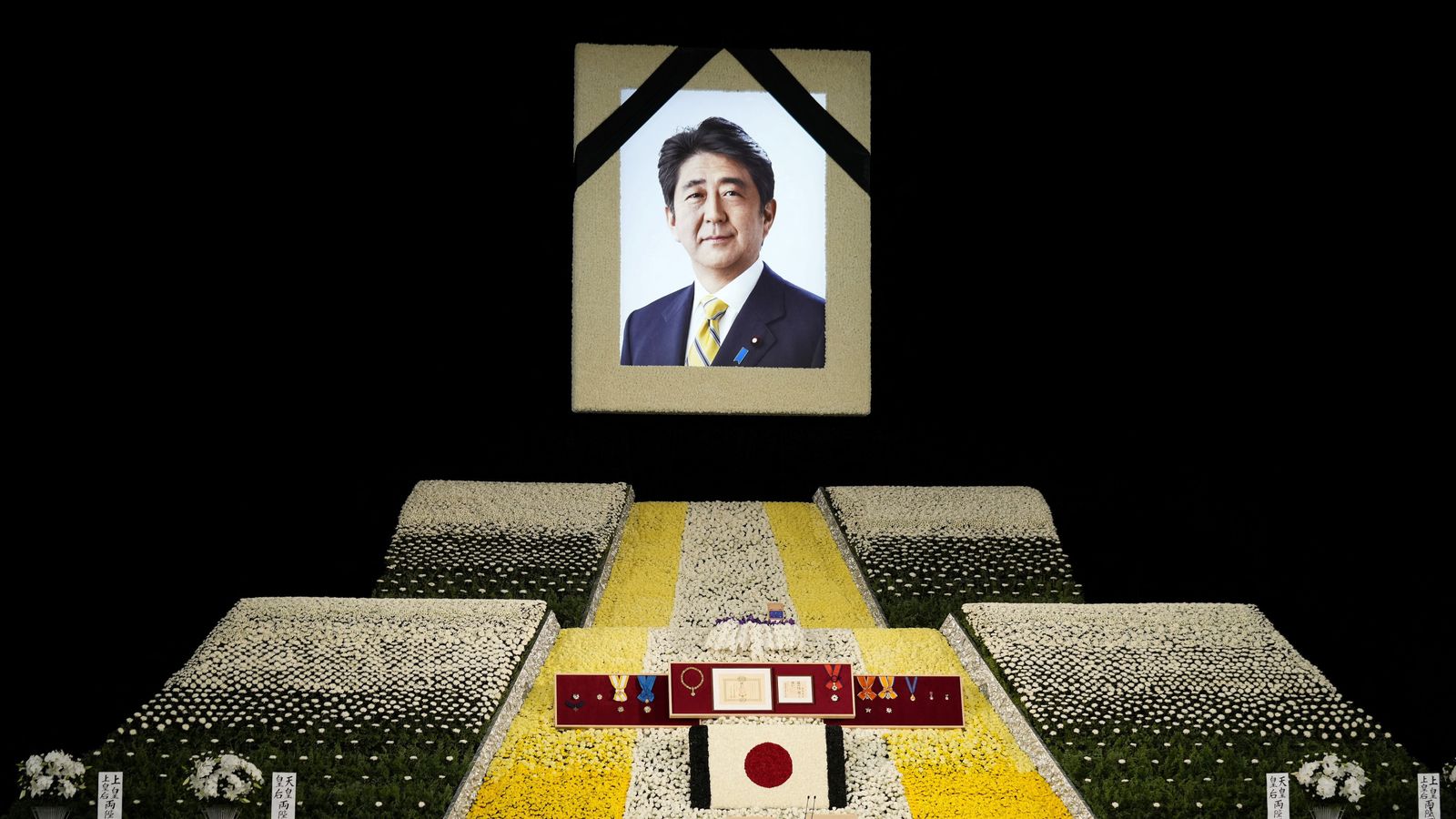 Leaders from across the world have gathered for the state funeral of Japan’s assassinated former prime minister Shinzo Abe.

More than 4,300 people attended the event, which has caused nationwide protests, in Tokyo’s Budokan Hall as thousands of armed police were posted around the capital.

Mr Abe, the country’s longest-serving leader, died after being shot at close range on 8 July at a campaign rally in the city of Nara.

US Vice President Kamala Harris, former UK prime minister Theresa May and Foreign Secretary James Cleverly were among those who attended the funeral.

Hours before the ceremony began, dozens of people carrying bouquets of flowers queued at public flower-laying stands at nearby Kudanzaka Park.

Roads around the venue are closed throughout the day, with military personnel at the ceremony, following acknowledgements that security flaws contributed to Mr Abe’s death.

The funeral began when his widow, Akie Abe entered the hall carrying an urn continuing her husband’s ashes.

The state funeral has proved controversial in Japan, as protesters across the country have called for the event to be cancelled over its cost and widening economic disparities caused by the former prime minister’s policies.

While Shinzo Abe was loved by nationalists and many on the right in Japan, protesters have dubbed his policies as pro-war.

Recent demonstrations included an elderly man who set himself on fire last week in apparent protest at the event.

State funerals in Japan have historically been reserved for the emperor.

Mr Kishida has come under fire for forcing through the event which cost about 1.7 billion yen (£11m).

The death of Mr Abe also triggered a series of revelations about ties between lawmakers in the ruling Liberal Democratic Party, which Mr Abe led, and the ultra-conservative Unification Church, which has been called a cult.

Mr Abe’s alleged assassin reportedly told police he killed him because of his links to the church.

While Mr Kishida said the state funeral was justified by Mr Abe’s domestic and diplomatic contributions, protesters believe it is a reminder of how pre-war imperialist governments used state funerals to fan nationalism.

‘Communist Party, step down!’: Rare protests in China as anger grows over COVID lockdowns and fatal fire
Renault wants to use water from depths of 4,000 meters to supply heat to an old production plant
White House weighs future release of emergency heating, crude oil reserves as winter nears
English cricket bowled over with £400m private equity bid for The Hundred
Musk would back Trump rival in 2024 election – with former president under fire for dining with white supremacist